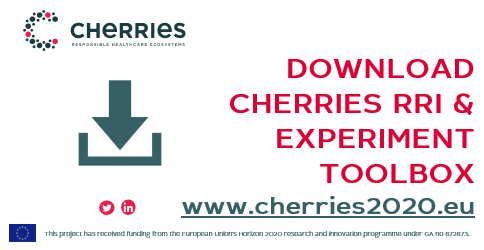 The CHERRIES “RRI and Experiment Toolbox”, set up by K&I with the active contribution of all the CHERRIES partners during the first period of the project, is ready and is accessible for the regional teams involved in the pilots and for those interested to implement in their local context the CHERRIES approach and methodology.

It collects and adapts RRI-related knowledge, tools, and other resources to support stakeholders and territorial partners in the implementation of the three CHERRIES experiments. Based on the screening and selection of RRI promising practices in health, the Toolbox incorporates existing resources from European and national projects and activities focusing on RRI, RIS3, and healthcare interface.

The Toolbox includes the introduction and two parts.

The first part, titled “RRI in health. General resources for understanding and framing RRI in the healthcare sector”, provides the general framework in which the definition and the implementation of RRI-oriented demand-driven innovation initiatives in healthcare should be placed.

The second part, titled “RRI demand-driven innovation approach”, provides resources useful for implementing RRI-oriented demand-driven innovation initiatives in healthcare and for triggering related-process of structural change within R&I territorial healthcare ecosystems. This second part is organised in five sections, according to the phases of the CHERRIES methodology and presents, for each of them, a set of resources useful for its implementation.

The Toolbox will also be soon accessible as web tool on the CHERRIES website.

The set up of the Toolbox can be considered an open process. The present version of the Toolbox might be therefore further improved and enriched through the next stages of the CHERRIES project, including possible tools developed and tested during the implementation of the three territorial RRI/demand-driven pilots, and other relevant resources identified within and outside the Consortium.

Please let us know if you have any further resource you would like us to include in the toolbox: get in touch!