During the General Assembly that took place on June 16 -18, Leiden University represented by the Centre for Science and Technology Studies, shared the preliminary results from the Territorial mapping, as part of the development of Work package 2. This “chapter” entails the policy and stakeholder mapping and the Smart Specialization Strategy with a focus on Health and Innovation for the three pilot regions of Murcia, Örebro, and Cyprus.

The regional partners represented by the organizations CEEIM, OLL and CYRIC, communicated the ongoing work in relation to the collection and analysis of policy interventions and strategies, and an overview of the stakeholders’ identification process. This content was later on discussed during the breakout session, when the regions shared their considerations for the following steps, in relation to the engagement of territorial actors and the analysis of policy-related documentation.

Under the framework of the Smart Specialization strategy, the session continued with the presentation of Leiden University with a summary of the bibliometric analysis. These analyses consider the measurement of Knowledge production through scientific publications, in order to visualize the fields and subfields on which the 3 regions have strengths,  advantages, and opportunities for diversification. The data used for the analysis come from publications in journals processed for Clarivate Analytics’ Web of Science database (WoS).

This way, using maps depicting the main Fields of Science (Figure 1 below), was possible to identify the subfield or topics emerging as relevant in the territories (represented by each node or circle). The bigger the circles, the larger the set of scientific publications in that specific subfield, considering all the publications produced in this field. As an example, one of the biggest circles, labelled with the code ‘3769’ in the Figure below from Cyprus, is associated to the subfield of nephrology. The same analysis for Örebro region showed mental health and Psychiatry as important, and for Murcia functional foods, were among the relevant subfields.

Furthermore, a scientific relatedness space was presented for each of the three regions. In these spaces the scientific fields were represented in which the regions have a relative high amount of publications compared to other regions in Europe. The closer these fields were placed together in these spaces the more often these fields are found together in the same European region. 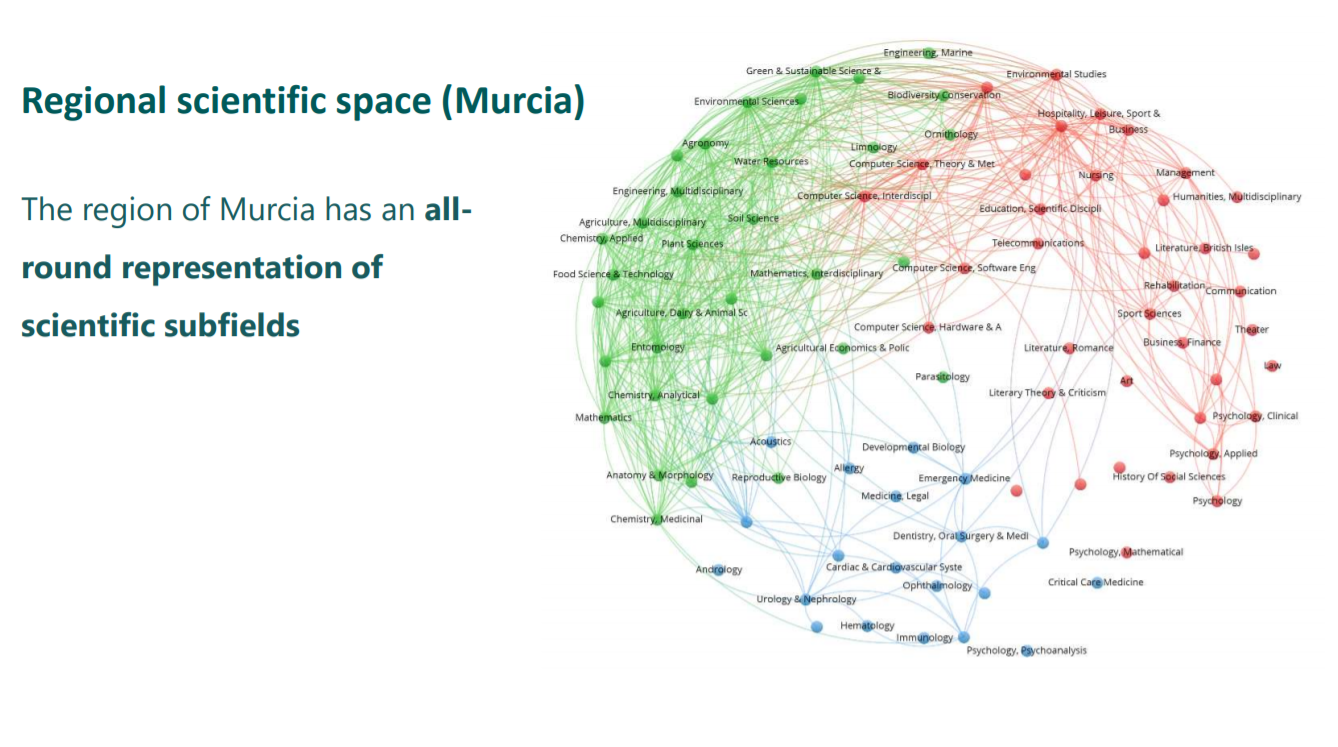 Maps of science and analysis like the aforementioned, lead us towards the following steps on the identification of priorities for Smart Specialization. The final selection of topics within Health and Innovation, will be afterward integrated with qualitative data coming from interviews, analysis of economic indicators, and the study of innovation behaviour among other variables to incorporate in the strategy for the territorial mapping.