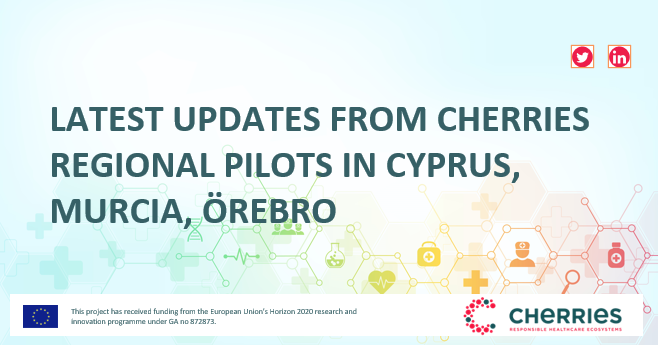 CHERRIES pilot experimentations were officially launched in summer 2021, once the selection process was completed and three Solution Providers were selected to co-design and co-create innovative solutions responding to identified needs in the regional healthcare sector. Click here to know more about the three pilots.

Local multi-stakeholders’ co-creation teams have been set up in each territory to carry out the CHERRIES transversal approach by involving the interested parties in the definition of needs (regional challenges) and further development of the solution. According to the nature of the challenge to be addressed in each territory, the co-creation teams are composed of the Solution Providers, the local partners and/or associated ones (e.g. challenge proposers, health professionals, patients or civil society organizations).

What is currently going on in CHERRIES regions? Time to get an update from the three territorial pilots!

DoctorsHello is the solution that was selected in Cyprus to meet the challenge “Provision of medical services to the Cypriot citizens that live in rural and remote areas and do not have easy access to healthcare services and prescribed medicines”.

DoctorsHello was initially developed as a peer-to-peer ecosystem, supporting real-world healthcare based on real-time distributed data. Being in close contact with the CHERRIES Project partners and regional pilot team in Cyprus – CyRIC EUBIC and Aretaeion Iatrikon Kentron (ΑΙΚ) Hospital – DoctorsHello managed to co-create a tailor-made solution specifically customized on the needs of the rural population that AIK supports. Questionnaires and exhaustive workshops led to a custom E-health system, considering all those societal and demographic parameters needed for developing and employing a truly inclusive solution for the needs of Cyprus healthcare ecosystem. The initial architecture of the system has been retained while custom features have been added to streamline with the specific needs of end users and services providers, as identified in the User Requirement Analysis performed during the first 2 months of the project. Questionnaires were created to be distributed both to healthcare professionals and end-users in order to assess the current state of services provided and any additional needs, and then receive feedback after employing the solution in order to evaluate the defined KPIs. The solution is expected to be used by more than 500 users within the first 2 months of the validation / implementation stage. The feedback will be used to guide the re-engineering process and increase the impact to the benefit of the broader population that may reach the developed solution.

In the Murcia region, the CHERRIES pilot experimentation has been launched in June 2021 following the co-creation demand-driven methodology to develop an ICT solution to detect the progression in multiple sclerosis (MS). This on-demand ICT solution named MSProgress integrates a smartwatch and a mobile phone to collect data onto an eHealth platform using a kinetic algorithm for real time and accurate patient movement analysis that may contribute to detect any progression of the MS. Within the first phase, Pulso Ediciones, as selected Solution Provider, has worked on the development of the prototype in line with the requirements and inputs shared by the different actors of the co-creation team, composed by healthcare professionals, researchers, a patients’ association, innovation and business experts or policy makers. Based on the first findings, upgraded versions of the ICT solution were developed to optimize its performance and stabilize and speed up the data transmission. The objective of the second phase is to test the solution with 30 patients over a period of 5 consecutive months.

Laxå Municipality was selected to run a programme answering the CHERRIES Örebro challenge “BREAKING AND PREVENTING INVOLUNTARY LONELINESS AMONG ELDERLY”.

The pilot, started in June 2021, has now entered in its second phase, and is currently proceeding with the testing of various outreach activities to reach lonely elderly people.

Due to the COVID situation that has impacted the project in many ways, the activities with the target group have been postponed at the end of February and beginning of March. Nevertheless, the” meeting point” for elderly people in the municipality is remaining open.

A Webinar was held on the 31st of January to spread the word about the pilot and the work in Laxa municipality to  approximately 60 participants both from organisations within Örebro region and from other regions in Sweden.

This Webinar  included a presentation of the CHERRIES project, of the Örebro pilot, and promoted exchanges between the participants on success factors and barriers.